A-29 – A Force Multiplier in Counterinsurgency (COIN) 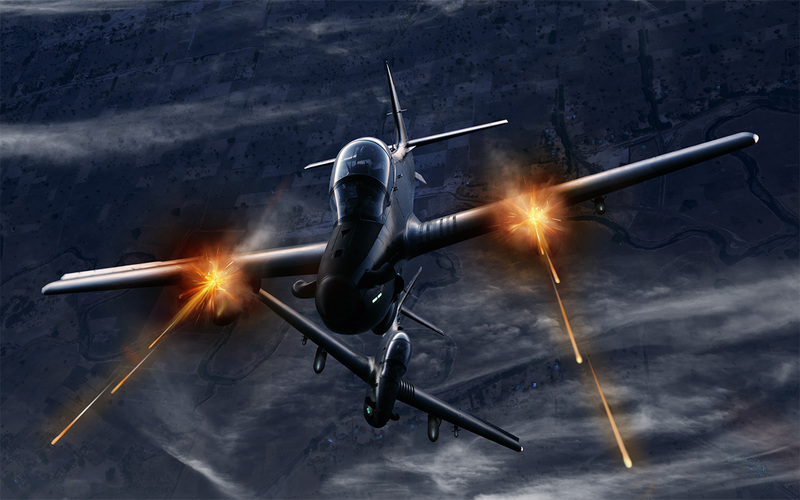 This article appeared in RealClear Defense and can be viewed here.

Air power cannot win wars. But without it, land forces rarely prevail. This was true for Allied forces in World War II, Korea, Vietnam and, of course, the 1991 Persian Gulf War and the 2003 invasion of Iraq. It is equally true for today’s struggle against insurgents and terrorist groups such as ISIS, al Qaeda, and Boko Haram.

Counterinsurgency warfare requires a different complement of aerial platforms than is the case for major conflicts between modern states. Coalition air forces are not required to seize control of the air in the face of hostile fighters and advanced ground-based air defenses. Thus, they can concentrate on missions that support ground operations: intelligence, surveillance and reconnaissance (ISR), close air support, battlefield interdiction and pilot training.

Modern, high-performance aircraft such as F-15, F16 and F18 fighters, B-1 bombers, and EA-18G electronic warfare planes have performed extremely well in Iraq and Afghanistan. But so too have relatively simple platforms including unmanned aerial systems.

The explosion of jihadist insurgencies across Africa, the Middle East and Asia has created an almost insatiable demand for airborne ISR and close air support. The U.S. Air Force, Navy and Marine Corps have conducted tens of thousands of sorties in the battle against ISIS in Iraq and Syria alone. But there is only so much air support that the U.S. and its Western allies can provide to multiple counterinsurgency conflicts. Moreover, in countries where the U.S. cannot operate, their own militaries need to acquire aerial capabilities. Most Western combat aircraft are too expensive and complex for many countries fighting insurgencies to acquire, operate and maintain. Counterinsurgency air missions generally require aircraft to operate low, slow and for protracted periods of time.

After the conclusion of Operation Enduring Freedom in Afghanistan, the U.S. Air Force recognized the need to rebuild an Afghan Air Force (AAF) and provide it with combat aircraft suited to both that country’s operational environment and its limited financial, technical and human resources. Since it was anticipated that the U.S. and its coalition partners would one day leave the country, whatever aircraft the AAF acquired would have to be ones they could operate and sustain with indigenous resources.

The U.S. Air Force defined a requirement for a light air support (LAS) platform that could provide the Afghan military with reliable close air support, convoy escort, reconnaissance, and training.

Based on a competitive procurement, in 2013 the U.S. Air Force awarded the LAS contract to a team headed by Sierra Nevada Corporation (SNC) for the A-29 Super Tucano.

Based on the proven Embraer aircraft, the A-29 is a relatively simple, sturdy, propeller-driven aircraft, able to operate from austere airfields. However, the LAS is equipped with advanced electro-optical sensors, modern avionics, a laser target designator, a 20mm cannon, two 12.7mm machine guns and the ability to carry a wide variety of munitions including precision-guided ordinance. One of the most effective weapons is BAE’s Advanced Precision Kill Weapons System, a 70mm laser-guided rocket with a three-foot miss distance.

The A-29 first began operating in Afghanistan in 2016. Twelve aircraft have been delivered, seven are in the U.S. for training, and another six will be provided to the AAF by 2018.

Over the past eighteen months, the LAS have conducted hundreds of missions across the country including at high altitudes and in regions with extreme temperatures. Afghan maintainers, trained in the U.S, have demonstrated a growing ability to support a high operational tempo. It is likely that over time additional aircraft will be bought in order to allow the AAF to provide air support throughout Afghanistan.

The capabilities the A-29 provides has drawn the attention of other nations facing similar challenges from terrorist organizations, as well as the need to surveil and secure long land borders. The U.S. government has agreed to sell six Super Tucanos to Lebanon which is dealing with a number of threats to its security. Recently, the U.S. government approved Nigeria’s request for twelve A-29s.

This country is in a deadly struggle with one of the most vicious ISIS-affiliated groups, Boko Haram, but lacks the appropriate aircraft to conduct ground attack/ISR operations over the heavily forested terrain in which the terrorist group operates. With its advanced sensors and laser designator, the A-29 will enable the Nigerian Air Force to conduct precise close air support strikes in populated areas while reducing the risk of collateral damage. The A-29 is the perfect aircraft for Nigeria.

While attention has naturally been focused on the A-29’s abilities for weapons delivery, it is equally useful as an ISR platform. The LAS is currently deployed with a turret mounting sophisticated electro-optical/infrared sensors and a laser designator. SNC has been developing additional options for the A-29’s avionics and sensor suites. With its ability to operate from austere airfields and in a wide range of environmental conditions, the A-29 is well suited to the border security mission. There are many countries dealing with long, porous borders that would find the A-29 a useful addition to their national security capabilities.

The A-29’s growing popularity reflects the fundamental soundness of the aircraft itself and the value provided by its various electronics and sensor systems. Nations acquiring the SNC/Embraer variant of the Super Tucano get a cost-effective and versatile aircraft that can support a wide variety of missions. Based on its performance in Afghanistan, it is likely that other countries battling insurgents and terrorists will want to take a serious look at the A-29.

Daniel Gouré, Ph.D., is a vice president at the public-policy research think tank Lexington Institute. Goure has a background in the public sector and U.S. federal government, most recently serving as a member of the 2001 Department of Defense Transition Team.